Recently, Yin Heng's team, a researcher at the Natural Products and Sugar Engineering Research Group of Dalian Institute of Chemical Physics, Chinese Academy of Sciences, and Li Guohui's team, a researcher at the Molecular Simulation and Design Research Group of the State Key Laboratory of Molecular Reaction Dynamics, have made new progress in the interaction mechanism between lytic polysaccharide monooxygenase (LPMO) and insoluble cellulose substrates. This study revealed the interaction mode between LPMO and cellulose substrate, and determined the key amino acids that determine this process, thus explaining the substrate preference and regioselectivity of LPMO.

The interaction between enzyme and substrate is an important basis for revealing the catalytic mechanism of enzyme and guiding enzyme engineering transformation. However, because the substrates of some enzymes are insoluble, the application of traditional enzyme-substrate interaction research methods such as X-ray crystal diffraction and nuclear magnetic resonance is greatly limited. One example is LPMO-mediated oxidative cracking of cellulose. LPMO is a large class of metalloenzymes discovered in recent years that can destroy the crystallization region of insoluble polysaccharides such as cellulose through oxidation. They can provide more action sites for cellulose hydrolase, thus improving the degradation efficiency of cellulose. Yin Heng's team systematically carried out the excavation and activity research of LPMO, and jointly constructed the photoelectric drive-LPMO enzyme catalysis system (Appl. Catal.B: Environment  , 2020, 265: 558; Int. J. Biol. Macromol., 2019, 139: 570; Int. J. Biol. Macromol., 2015, 79: 72). However, little is known about the interaction mechanism between LPMO and cellulose substrate.

To address this issue, Through the strategy of combining computational chemistry with biochemistry, The interaction mode between AA9 family LPMO from thermophilic bacteria and cellulose was first revealed. It was found that the enzyme could stably bind to the hydrophobic surface of insoluble polysaccharide substrate by acting on two adjacent polysaccharide chains at the same time. It was also suggested that the regioselectivity of LPMO was related to the binding position of substrate. In addition, the research team also established a relationship model between hydrogen peroxide accumulation and substrate binding during the enzymatic reaction, thus proving that the oxidation process of LPMO-catalyzed insoluble polysaccharides is mainly driven by hydrogen peroxide. These findings deepen people's understanding of the interaction mechanism between LPMO and cellulose substrate and provide theoretical support for subsequent enzyme engineering modification and effective utilization of cellulose and other polysaccharide resources.

The relevant results are published in The Journal of Physical Chemistry Letters. The work is supported by the General Project of the National Natural Science Foundation, the Youth Innovation Promotion Association of the Chinese Academy of Sciences, the "Xingliao Yingcai" Project of Liaoning Province and the Scientific Research and Innovation Fund Project of Dalian Institute of Chemical Technology. 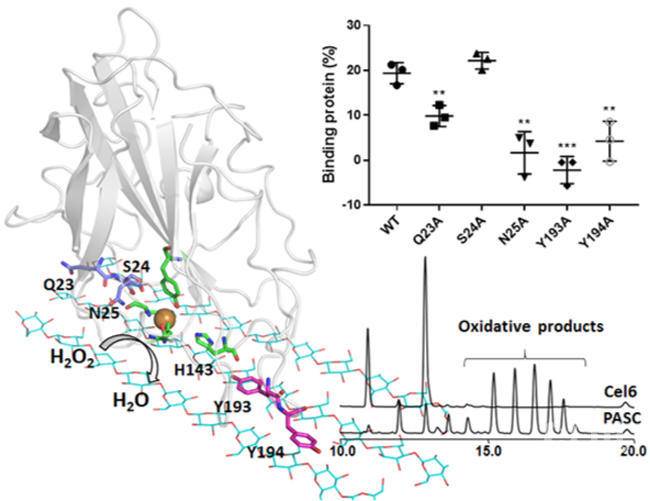 Interaction between LPMO and Cellulose and Its Key Amino Acids