Alzheimer's disease Alzheimer's disease, AD ) It is a serious degenerative disease of the central nervous system. Clinically, there is a lack of drugs and intervention methods that can effectively delay or reverse the disease process, which seriously endangers the health and quality of life of the elderly and brings huge burden to families and society. There have always been many hypotheses about the pathogenesis of AD, such as cholinergic defect, amyloid cascade reaction, Tau protein hyperphosphorylation, etc. However, drugs with a single mechanism of action developed against these hypotheses have not achieved ideal clinical efficacy so far, suggesting that human understanding of the pathogenesis of AD is still greatly limited and new breakthrough methods need to be explored urgently.
Today, I'd like to take you back to a classic study. At the end of the article, there are heavy MOST Lecture Forecast.
On December 10, 2019, Jiang Hualiang, Gao Zhaobing and Zhang Haiyan of Shanghai Institute of Medicine, Chinese Academy of Sciences cooperated in National Science Review The magazine published a report entitled High-resolution mapping of brain vasculature and its impact in the hippocampus of Alzheimer's disease mice  The results showed that the vascular system in the brain of AD model mice, especially in the hippocampus, was significantly damaged, suggesting that the importance of vascular injury in the pathological process of AD was far from fully understood, which pointed out a new direction for the development of efficient AD therapeutic drugs and intervention methods. 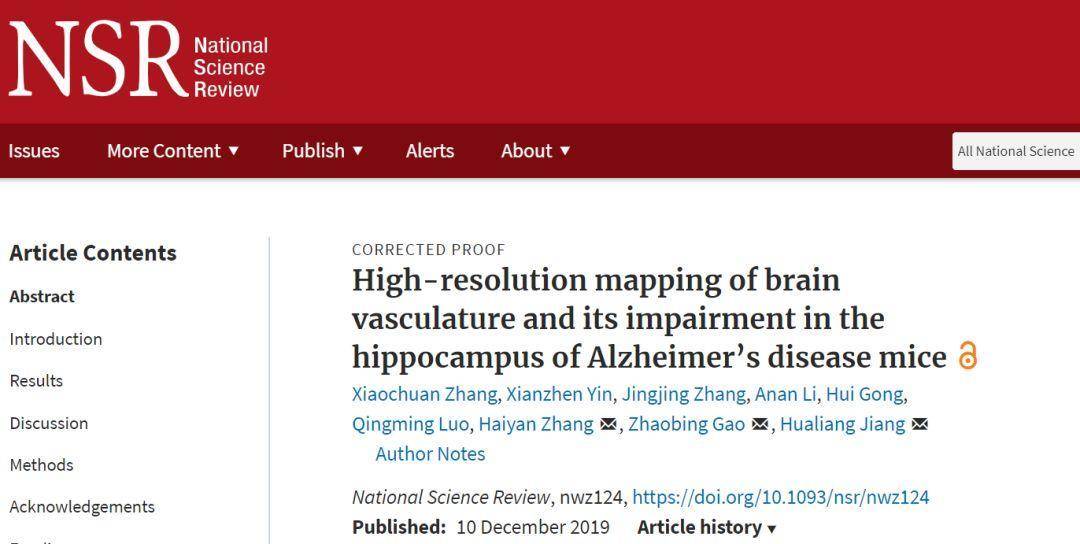 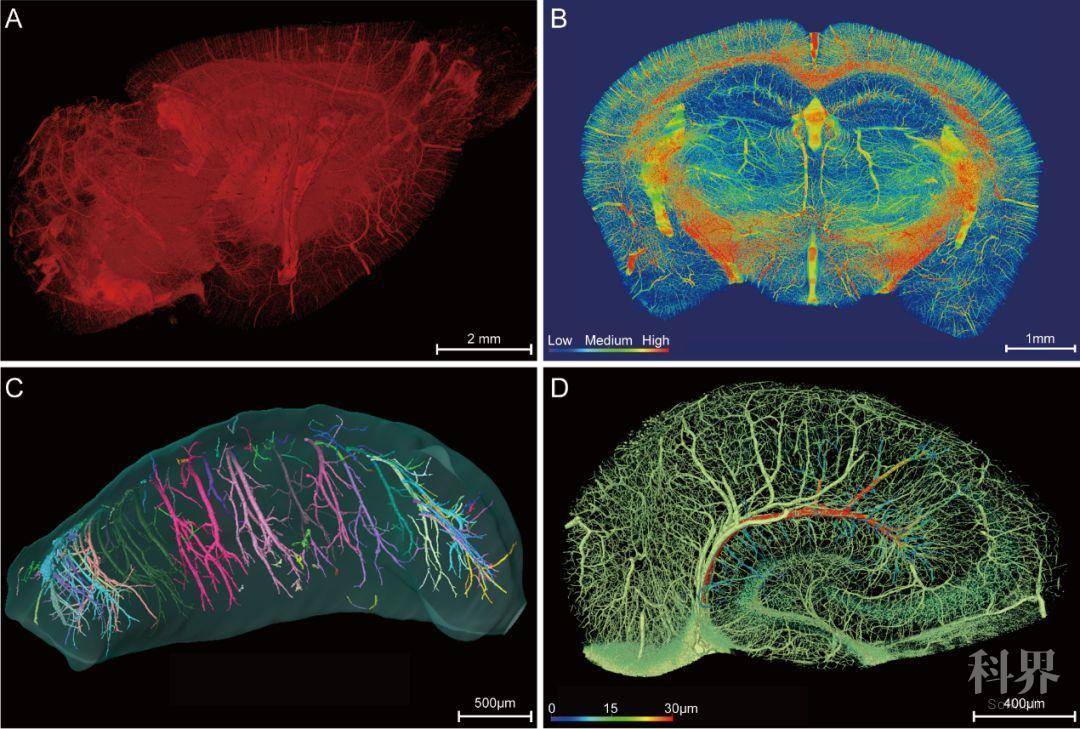 
The construction of the whole cerebrovascular network, especially the high-precision analysis of the microcirculation system, is the prerequisite for obtaining this research result. Before that, there are still many challenges in realizing high-resolution imaging of whole brain scale, enhancement of low signal-to-noise ratio image data, visualization and quantitative analysis of high spatial complexity three-dimensional image data, etc. In this work, the research team applied the original MOST technology developed by Professor Luo Qingming's team of Huazhong University of Science and Technology, and obtained APP/PS1 transgenic AD model mice at the resolution level of 0.35 × 0.35 × 1.00 microns for the first time. (Tg-AD) Based on the whole brain data set of the team, the preprocessed image was optimized by using the algorithm developed by the team itself, and a cross-scale 3D vascular map of the whole mouse brain was constructed, which included large blood vessels with a diameter of several tens of microns to capillaries with a diameter of less than 2 microns. (Figure 1) . The mean diameter and volume fraction of hippocampal vessels in AD model mice were found by quantitative analysis of cerebral vascular network in AD model mice and wild type mice (Vascular volume per unit volume of tissue) All of them were significantly reduced. Further comparative analysis of different subregions of hippocampus revealed that the molecular layer of dentate gyrus (DG-ml) Average vessel diameter and vessel length density of (Vascular length per unit volume of tissue) And the blood vessel volume fraction decreased significantly (Figure 2) . In addition, the quantitative analysis results of single-branch vascular branching pattern show that in addition to the thinning and reduction of blood vessels, the vascular branching angle of AD model mice is significantly smaller, resulting in a decrease in blood perfusion area of single-branch hippocampal vessels. Using the virtual vascular endoscopy technology pioneered by the research team, the study further revealed that AD model and wild-type mice have significant differences in the roughness of the inner wall of vascular cavity and the smoothness of branch nodes. (See Figure 3 and Video) . The above research results prove that cerebrovascular system and hippocampal microcirculation play an important role in the pathological process of AD. 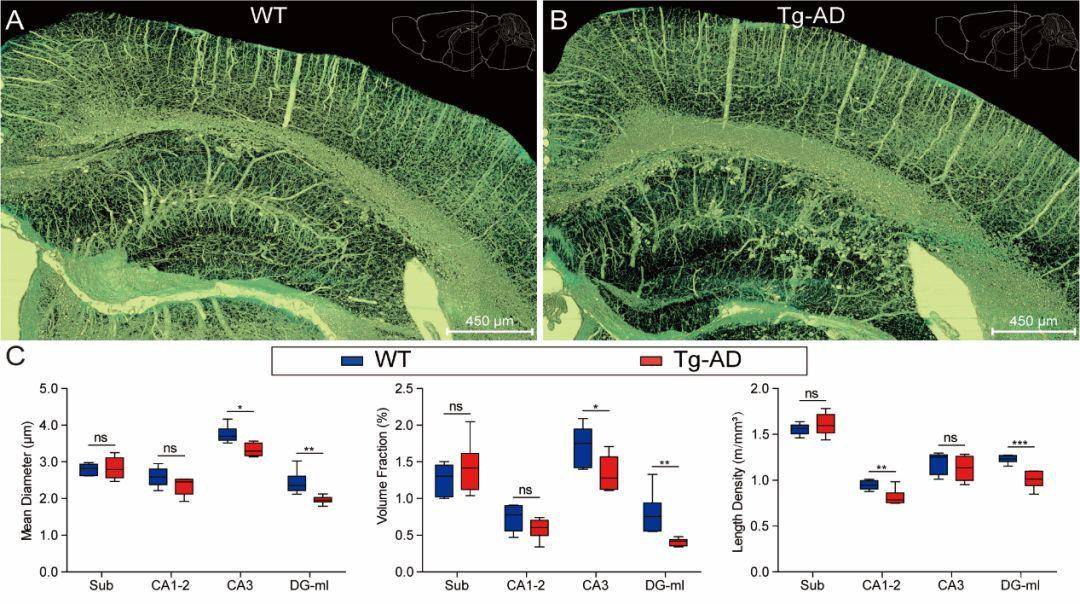 Fig. 2. Comparison of visualization and quantitative analysis of hippocampal vessels between wild-type and AD model mice. Visual reconstruction of vascular network in the right hippocampus and its adjacent brain regions of (A-B) WT and Tg-AD mice. The two dotted lines on the brain contour map in the upper right corner indicate the location of reconstructed blood vessels in A-B. (C) Comparison of mean diameter volume fraction and length density between WT and Tg-AD mice in four hippocampal subregions.


The video is wonderful. Open it and have a look.
To carry out this study, The Shanghai Institute of Medicine of the Chinese Academy of Sciences has set up an interdisciplinary research team with multi-disciplinary backgrounds including computer image processing, neuropharmacology, drug research and development, Focusing on the construction and analysis of high-precision microvascular maps, an efficient image optimization algorithm for background correction, noise suppression and contrast enhancement of coronal data is developed, and a software and hardware platform for fast and high-precision 3D rendering and quantitative analysis of microstructure morphology is built, realizing TB-level scale. (trillions of bytes, 20,000 × 30,000 × 12000 Voxels) Three-dimensional atlas data mining based on.
After quantitative analysis of the whole cerebrovascular network of 2-month-old wild-type mice, the research team found that numerous and jumbled vascular networks with a total length of more than 300 meters were actually distributed in brain tissue not exceeding 0.2 cubic centimeters, and there were obvious differences in vascular distribution rules and morphological characteristics in different brain regions. In addition, compared with cortex, thalamus and other brain regions, hippocampus has the lowest average vascular diameter, vascular length density and vascular volume fraction. Through high-precision visualization of complete hippocampal vessels, it is found that the transverse vessels of the whole hippocampus are distributed in rake parallel perpendicular to the longitudinal axis of the hippocampus. In addition, the diameter of the main blood vessels in the molecular layer of hippocampal dentate gyrus decreased sharply after separating from the superior main blood vessels, and the branching angle was also close to right angle. (Figure 1) . This unique comb-shaped vascular branching pattern is obviously different from the graded branching pattern of other hippocampal subregions. The special branching pattern of the molecular layer blood vessels in hippocampal dentate gyrus may make them more vulnerable to damage, which is also consistent with the reduction of the average blood vessel diameter, blood vessel length density and blood vessel volume fraction in the molecular layer of dentate gyrus in AD model mice.

FIG. 3. Comparison of virtual endoscopic images of single hippocampal vessels in WT mice (A) and Tg-AD mice (B)

The high-resolution cross-scale visualization and quantitative analysis capability developed in this study is not only suitable for mouse cerebrovascular research, but also can be used for cerebrovascular research of other rats, monkeys and human with larger spatial scale, which is helpful for cross-scale comprehensive analysis of the correlation between brain-related diseases and vascular system injury.
Professor Luo Qingming of Huazhong University of Science and Technology, Gong Hui Professor and Li Xiangning The associate professor gave guidance and constructive opinions to the team's work.
Original link: Https://academic.oup.com/nsr/advance-article/doi/10. 1093/nsr/nwz124/5555738 # 189510181