Introduction
Black phosphorus (BP), as a new 2D nano-material, has triggered a series of research upsurge. Due to its unique physical and electronic structure, BP has highly anisotropic charge transport and light response characteristics. In particular, the folded honeycomb structure of BP has higher surface-volume ratio than other 2D nanomaterials. The large surface area provides abundant active sites for the adsorption of reactants or gas molecules. Therefore, in the past few years, applications based on BP, such as optoelectronics, batteries, catalysis and gas sensors, have been deeply explored. Although BP shows great potential, its short-term stability greatly limits the practical application of BP-based materials or equipment. The instability of BP can be attributed to its high reactivity to oxygen and water, which leads to its rapid degradation under environmental conditions. Under some harsh conditions (such as higher temperature), the degradation process can be accelerated, further limiting the application space of BP. Recent studies have shown that the instability of BP mainly comes from the highly active lone pair electrons of the surface P atom and the surrounding oxygen/water. There are two strategies to improve BP stability: 1) for an oxygen/water barrier on that surface of the BP; 2) Functionalization of P atoms reduces the reactivity of BP. The first strategy is to use various materials as basic materials to form a dense coating on the surface of BP. However, this passivation coating is a double-edged sword for BP, because it not only prevents oxygen/water from attaching to BP, but also prevents most molecules from interacting with BP. Although the stability of BP is improved, it will inevitably lose its application in catalysis, sensing and other fields. For the second strategy, surfactants, small molecules or metal (or transition metal) ions are usually used to modify the BP surface and form a thin protective layer through various interactions. Thanks to this non-dense thin protective layer, the physical/chemical characteristics of BP can usually be retained to the greatest extent. However, the inherent defect of this strategy is that the binding energy between the protective layer and BP is very low, which makes the protective layer easy to fall off and leads to the loss of stability of BP.
BP coatings with metal organic skeletons (MOFs) can effectively overcome such limitations. MOFs are composed of clusters linked by metal ions or organic ligands. Abundant metal ions in MOFs can interact with lone pair electrons of P atoms on the surface, thus reducing the surface electron density of BP and the reactivity of BP to O2 and H2O. Organic ligands cross-link metal ions to form a skeleton, thus making the failure of the protective layer require stripping the whole MOFs coating instead of dissociating only a single metal ion. Therefore, MOFs coating can realize the integrated functionalization of metal ions on the surface of BP, thus greatly improving the stability of BP. Importantly, MOFs have ultra-high porosity and large specific surface area, so MOFs protective porous coating can provide effective pore channel penetration for liquid or gas molecules. In addition, most MOFs have good thermal and chemical stability. Therefore, MOF coating can provide a suitable shell so that the embedded core can withstand some harsh conditions. In fact, improving the stability of BP will greatly expand its application potential in chemical or catalytic industries, especially when some BP devices operate under harsh conditions. For example, traditional semiconductor-based gas sensors usually have better gas sensing performance at higher operating temperatures. However, the previously reported BP gas sensor has the disadvantages of slow response speed, long recovery time, poor reversibility and serious resistance drift when working at room temperature, which greatly hinders its practical application. Therefore, it is necessary to develop a BP that can maintain stability at relatively high temperature to realize its stable operation at high temperature.

Recently, in Associate Professor Xu Jun of Xiamen University and Professor Tai Huiling of University of Electronic Science and Technology And Professor Zhao Yanli's team and others from Nanyang Technological University (co-author of correspondence) Under the leadership of MIL-53 metal organic framework (MOF) coating, Al ion BP functionalization is realized in an integrated way, greatly improving the environmental stability and thermal stability of BP. For the obtained MIL-53 coated BP (BP @ MIL-53), a large number of Al ions in MIL-53 interact with lone pair electrons of BP, then reduce the surface electron density of BP and reduce the effect of BP on O 2 And H 2 O. The growth of MOF makes Al ions on the surface of BP cross-link and realizes integrated functionalization to resist the separation of single Al ions from the surface of BP. The non-covalent bond of BP-Al and the high porous structure of MIL-53 retain the physical/chemical properties of BP to the greatest extent, making BP @ MIL-53 have super stability. This functionalization strategy expands the application of BP-based devices under high temperature conditions. BP @ MIL-53 is further used as NO at relatively high operating temperatures 2 Gas sensor. Compared with bare BP sensor, BP @ MIL-53 sensor has outstanding advantages of selectivity, high sensitivity and fast response recovery speed. The relevant results are entitled "The Art of Integrated Functionalization: Super Stable Black Phosphorus Achieved through Metal-Organic Framework Coating" Published in Adv. Function. Mater. In recent years, Han Bin, a master's graduate student from Xiamen University, and Duan Zaihua, a doctor's graduate student from the University of Electronic Science and Technology, are co-lead authors.

Introduction to Pictures and Text 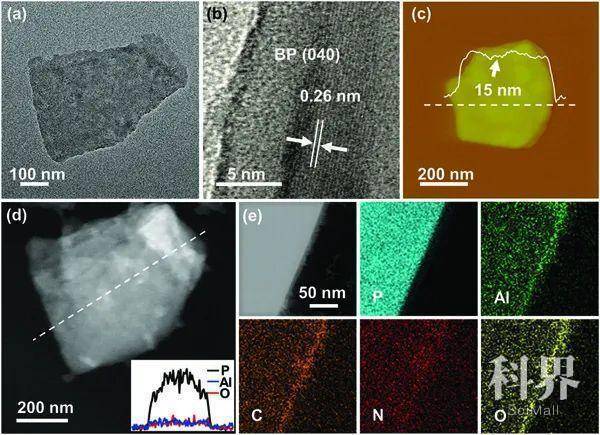 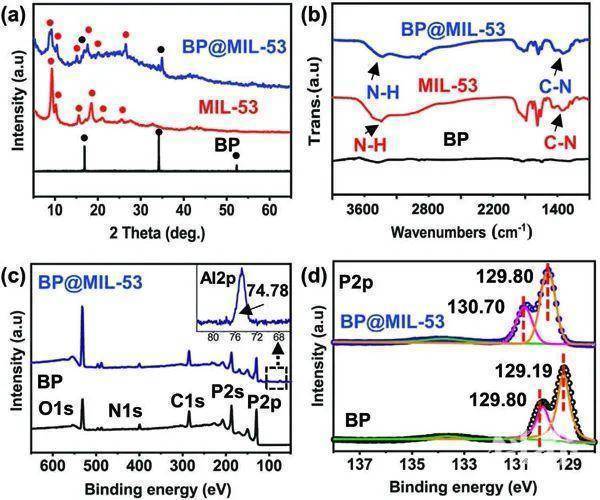 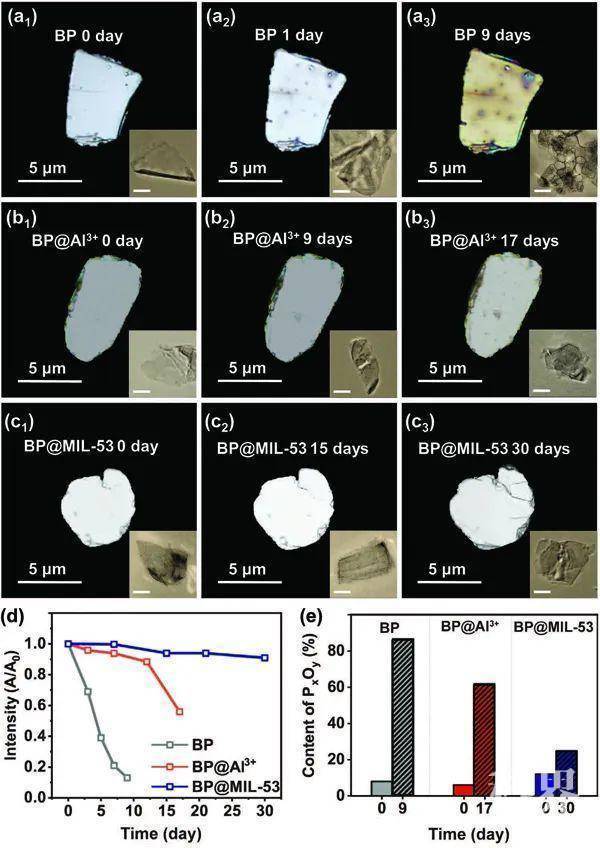 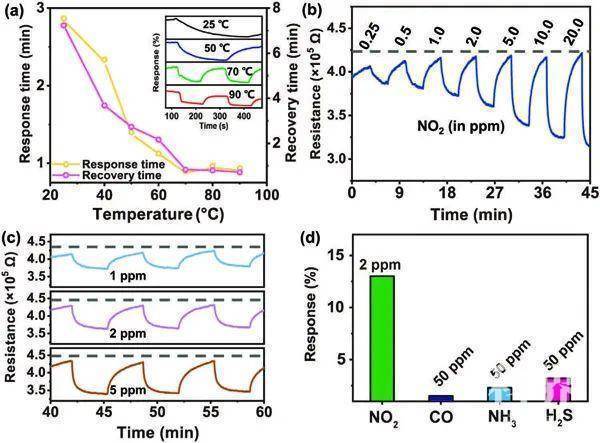 A) Changes in response time and recovery time of BP @ MIL-53 sensor to NO2 (1.0 ppm) at different temperatures. Illustration: Corresponding response curve. B) The dynamic response curve of BP @ MIL-53 sensor to NO2 gas (0.25-20 ppm) at 70 ℃. C) The response repeatability of BP @ MIL-53 sensor to 1 ppm, 2 ppm and 5 ppm NO2 at 70 ℃. D) The selectivity of BP @ MIL-53 sensor in the presence of interfering gas at 70 ℃.
Summary
To sum up, the Al ion integration functionalization of BP is realized through in-situ growth and coating of MIL-53 on the surface of BP. The bonding of lone pair electrons to BP reduces the surface electron density, which in turn reduces the reactivity of BP 2 O and O 2 ). The growth of MOF makes Al ions cross-link, which limits the separation of individual Al ions on BP surface. The non-covalent bond of BP-Al and the high pore structure of MIL-53 maintain the physical/chemical properties of BP to the greatest extent and improve the thermal stability of BP. BP @ MIL-53 is further used as NO at high operating temperatures 2 Gas sensor. Compared with bare BP sensor, BP @ MIL-53 sensor has high response, high selectivity and good recovery dynamic process. This study provides a strategy for the integration and functionalization of metal ions on BP, which can be extended to other 2D materials and broaden their application range.
Literature Links: The Art of Integrated Functionalization: Super Stable Black Phosphorus Achieved through Metal-Organic Framework Coating (Adv. Function. Mater.,   2019, DOI: 10.1002/adfm. 202002232)
Surfaces gases coatings sensors